First light with a TEC140 that was delivered in February of this year. This is M100, a Milky Way-sized spiral galaxy, roughly 55 million light years distance.

As I was finishing processing tonight, I learned that a supernova had been discovered in M100 by Jaroslaw Grzegorzek, on the same night (April 29) that I took my last lights of this target. Apparently, I caught it. See green crosshairs in the image and this page for reference: http://www.rochesterastronomy.org/sn2019/sn2019ehk.html

I have to tell you: as excited as I am to start working with the TEC, and as moderately pleased as I am with this image (colors were a challenge), I'm thrilled with accidentally capturing my first supernova: something that's been on my bucket list for a while. 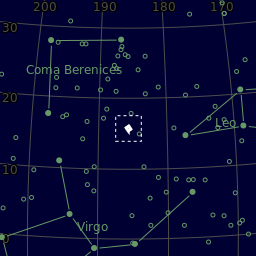