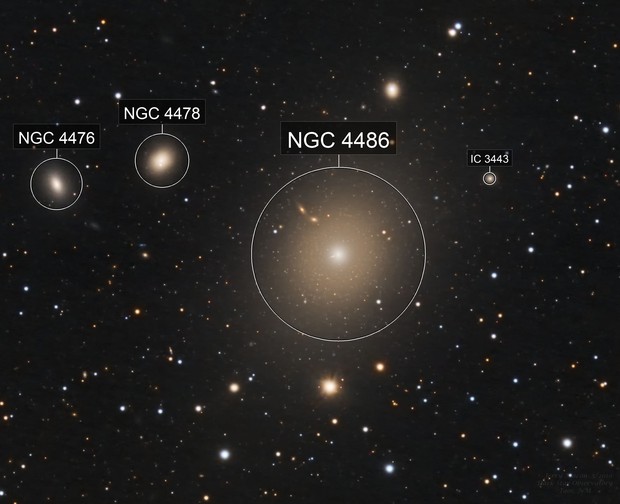 Images from the following two scopes (piggybacked) contributed to this image:
AG12+ASI1600MM at .70 asec/pix
TV127is+ASI183MM at .75 asec/pix.
They were all registered to the best R image taken on the AG12.
Using L from the TV NP127is refractor effectively eliminates the spikes from the AG12.

The relativistic plasma jet is clearly visible angling slightly down and to the left of the center of the galaxy. The black hole at the center of M87 has been in the recent news as the first black hole ever imaged.

Messier 87 (also known as Virgo A or NGC 4486, generally abbreviated to M87) is a supergiant elliptical galaxy in the constellation Virgo. One of the most massive galaxies in the observable universe, it has a large population of globular clusters—about 12,000 compared with the 150–200 orbiting the Milky Way—and a jet of energetic plasma that originates at the core and extends at least 1,500 parsecs (4,900 light-years), traveling at relativistic speed. It is one of the brightest radio sources in the sky and a popular target for both amateur and professional astronomers.

The French astronomer Charles Messier discovered M87 in 1781, and cataloged it as a nebula. M87 is about 53 million light-years from Earth and is the second-brightest galaxy within the northern Virgo Cluster, having many satellite galaxies. Unlike a disk-shaped spiral galaxy, M87 has no distinctive dust lanes. Instead, it has an almost featureless, ellipsoidal shape typical of most giant elliptical galaxies, diminishing in luminosity with distance from the center. Forming around one-sixth of its mass, M87's stars have a nearly spherically symmetric distribution. Their population density decreases with increasing distance from the core. It has an active supermassive black hole at its core, which forms the primary component of an active galactic nucleus. The black hole was imaged using data collected in 2017 by the Event Horizon Telescope, with a final, processed image released on 10 April 2019.

The galaxy is a strong source of multiwavelength radiation, particularly radio waves. Its galactic envelope extends to a radius of about 150 kiloparsecs (490 thousand light-years), where it is truncated—possibly by an encounter with another galaxy. Its interstellar medium consists of diffuse gas enriched by elements emitted from evolved stars.
(Wikipedia) 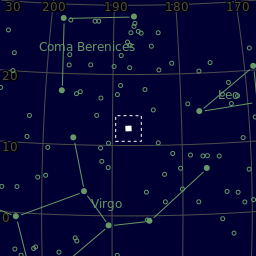