Arp 42, NGC 5829, is an example of the 'Spiral with LSB Companions on Arms' classification by Halton Arp. The Atlas note says "faint bifurcated arm to comp. one faint arm on comp. coiled same direction as parent".

There are a lot of very faint galaxies in the field. NGC 5829 and IC 4526 are the 2 major players. These two, plus three of the small galaxies nearby, form the Hickson Galaxy Cluster 73. Also there are two more tiny galaxies at the end of the arm which swings across the top of NGC 5829, north of the core. Also the whole group lies right at the north edge of Abell Galaxy Cluster 2017, and you can see loads of tiny galaxies in the southern half of the field.

The Arp atlas image can be seen here;

My image the sum of 30 x 120 exposures could do with a bit more sometime. 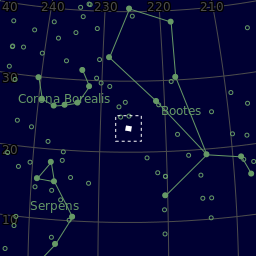