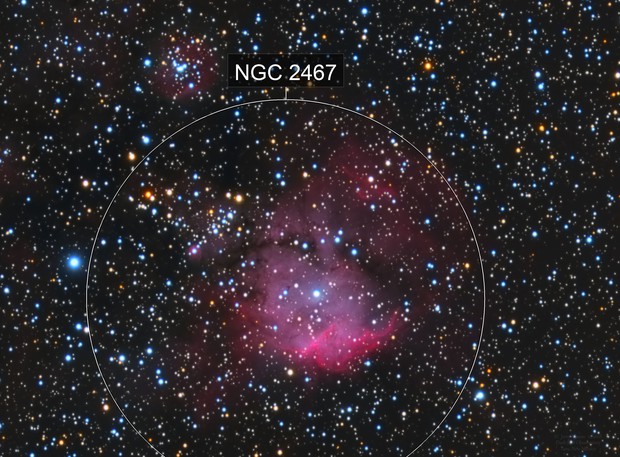 Images from the following two scopes (piggybacked) contributed to this image:
AG12+ASI1600MM at .70 asec/pix (RGB)
TV127is+ASI183MM at .75 asec/pix. (L)
They were all registered to the best R image taken on the AG12.
Using L from the TV NP127is refractor effectively eliminates the spikes from the AG12.

NGC 2467 is a star-forming region, popularly known as the "Skull and Crossbones nebula," whose appearance has occasionally also been likened to that of a colorful mandrill. It includes areas where large clouds of hydrogen gas incubate new stars. This region was one of the areas featured in the book Hubble’s Universe: Greatest Discoveries and Latest Images by Terence Dickinson.

NGC 2467 had long been considered to be the nucleus of the Puppis I association. However, NGC 2467 does not represent a distinct open cluster; rather, it represents a superimposition of several stellar groups along the same approximate line of sight that have distinctly different distances and distinctly different radial velocities. One of these is a young and very distant group beyond Puppis OB2, while another, nearer group with later type stars lies at a similar distance as Puppis OB1.

The region is dominated by a massive young star, HD 64315 (below and left of center), of spectral type O6. Two stellar clusters also exist in the area, Haffner 19 and Haffner 18 . H19 is a compact cluster containing a Strömgren sphere which is ionized by a hot B0 V type star. H18 contains a very young star, FM3060a, that has just come into existence and still surrounded by its birth cocoon of gas (on left side). The age of H19 is estimated to be 2 Myr, while the age H18 is somewhat controversial, some considering it to be as young as only 1 Myr.

The H II region of NGC 2467 has been the target of various investigations to elucidate the process of star formation. Unresolved questions include understanding the degree to which the stars already formed in such regions, especially the massive O or B stars, can affect the future formation of stars in the region: Do these pre-existing stars trigger the formation of others? One such investigation was conducted using the Spitzer Space Telescope, which discovered 45 young stellar objects (YSOs), or protostars, in the region during its "cold" mission, i.e. before its supply of liquid helium ran out. The YSO's are mostly along the edge of the HII region. The concentrated distribution of these objects spatially correlated with the ionization fronts provides evidence for triggered star formation. The newly forming ptotostars are concentrated in areas where the shock front driven in advance of the ionization front compresses the molecular gas.
(Wikipedia) 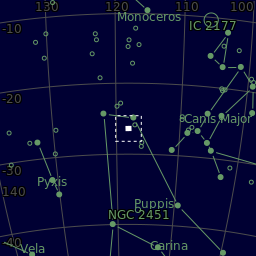