Turns out this Abell has been studied... just need a little better equipment to do it justice:

Abell 14 is a poorly studied object despite being considered a born again planetary nebula. We performed a detailed study of its 3D morphology and ionization structure using the SHAPE and MOCASSIN codes. We found that Abell 14 is a highly evolved, bipolar nebula with a kinematical age of ∼19,400 yr for a distance of 4 kpc. The high He abundance, and N/O ratio indicate a progenitor of 5 M⊙ that has experienced the third dredge-up and hot bottom burning phases. The stellar parameters of the central source reveal a star at a highly evolved stage near to the white dwarf cooling track, being inconsistent with the born again scenario. The nebula shows unexpectedly strong [N I] λ5200 and [O I] λ6300 emission lines indicating possible shock interactions. Abell 14 appears to be a member of a small group of highly evolved, extreme Type-I PNe. The members of this group lie at the lower-left corner of the PNe regime on the [N II]/Hα vs. [S II]/Hα diagnostic diagram, where shock--excited regions/objects are also placed. The low luminosity of their central stars, in conjunction with the large physical size of the nebulae, result in a very low photo-ionization rate, which can make any contribution of shock interaction easily perceptible, even for small velocities. 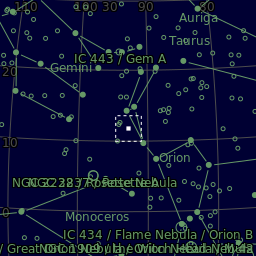