This time, we turned to a more well-known region that we find beautiful and very varied:

At 424 light years, within the limits of the constellation of Sagittarius and at the edge of the Southern Crown is the molecular cloud of Corona Australis, in which we find several magnificent nebulae by reflection (dust clouds reflecting the light of neighboring stars) and several dark nebulae (clouds of gas and dust that do not receive not enough light from any nearby star and present themselves as dark and mask the stars behind).

NGC 6726/6727 and IC 4812 are blue reflection nebulae, NGC 6729 is a butterfly-shaped object acting in emission/reflection around an irregular variable star R Coronae Australis (R CrA) discovered in 1866 with a magnitude varying from 9.7 to 13.5. This star is so hot that it causes the ionization of the gas present which therefore emits light. Be 157 original is a little and faint reflexion nebula.

There are also herbig-haro objects, the most visible of which in the image are HH98,99, 100, 101 and 104. These are small clouds associated with some very young stars, which form when matter ejected by these nascent stars collides with the surrounding clouds of gas and dust, at speeds of several hundred kilometers per second. Herbig-Haro objects are ubiquitous in regions of stellar formation, and often it is possible to observe several around the same star, aligned along its axis of rotation.

They are seen as delicate little arcs of luminous gas. All in a set of dark nebulae: SL 39, SL 41, Be 158 and part of the large Be 157. In addition, in the top right corner shines the globular cluster NGC 6723 of magnitude 6 to 6.8 of class VII consisting of stars of magnitude 14 and less. 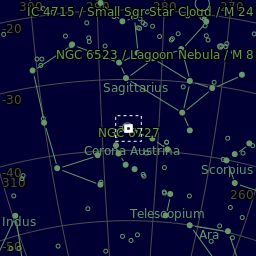