Processed by Alex Woronow (2020) using PixInsight, Topaz, and a touch of other apps

The Small Magellanic Cloud (SMC) is a dwarf satellite galaxy proximal to our Milky Way Galaxy, and, no surprise, extremely well studied. November 2020’s Astronomy magazine (which I received just last night) summarizes much of our current knowledge about this object. Anyway, with the anti-dearth of information available on the SMC, I’ll just make a couple of comments. The SMC is classified as a barred spiral galaxy, although that’s not readily apparent from the pictures. In part that is because it tilts somewhat away from us but also because it has been highly distorted through gravitational interactions with its friend, the Large Magellanic Cloud (LMC), and with the Milky Way. At least one close encounter between the LMC and the SMC has left a “bridge” of debris between the two, a bit of which is delineated on the overlay (revealed by a mouse-hover) and in Image B. In the marked portion of the bridge, some ‘starbursts’ occur, where groupings of young blue stars have recently formed. However, most of the bridge is delineated by an excess abundance of neutral hydrogen (HI), which appears as a dark cloud against background stars—in this case, not too dark and difficult to detect (and not at all detected in this image). Another interesting feature of the SMC is that it is surrounded by a dark halo, probably also of HI, that may have been pulled out of the SMC by its gravitational interactions with the LMC. This halo is difficult to observe but can be seen in the greatly stretched and Local-Histogram-Equalized blue-channel image, Image C. (These circum-galactic dark halos may be more the rule than the exception.) 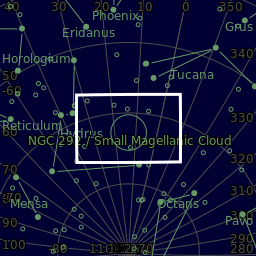