I am happy to announce a new discovery by my dear friends Marcel and Xavier.

I had the opportunity to participate, collecting the data for the composition of this beautiful image.

The Object is a so called a "cataclysmic nova" and probably it is the lost Nova, which was observed by Chinese astronomers in 1065.

The central star is a binary of a white dwarf and a RRLyr type star. Both stars orbit extremely closely in only 2 solar radii at a distance.

Discovered in January 2020 by Marcel Drechsler

A small addition from the discoverers ;-)

In August 1064, Chinese and Korean astronomers observed a new star in the constellation of T'ien-Miao (today Hydra).This new star was only visible in the sky for a short time and was described as "as bright as a lamp".today there is no longer a very bright star in this part of the sky, but Xavier and I discovered a structure in this part of the sky which could probably be the lost remains of the Liao Shih Nova from 1064/1065.

We are very grateful to Stefan Kimeswenger of the Institute of Astro & Particle Physics Innsbruck for the analysis and determination of this extraordinary object, which is a nova event from the interaction of two very close stars. Possibly the structure originates from a relatively short "common envelope" phase of the two stars. The companion star is in the atmosphere of the primary star. This rare event leads to the loss of torque and the ejection of a part of the atmosphere of the primary star. 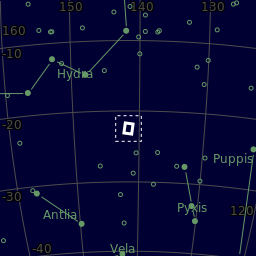