There are several versions of the Squid by itself with full capture details. The difference between the two monochrome versions of the Squid is the application of HDR Multiscale Transform which reduces the halo on the central star as well as the amount of data used: (A) is based on the full ~53 hours whereas (B) is based on the best 40 hours. (C) and (D) are corresponding versions that combine O3 in the blue channel with RGB stars along with changes in the amount of saturation and brightness. Similarly with (E) and (F), but the Squid is in monochrome mixed with the RGB stars background. Finally, the last image is the re-processed O3 version without and without RGB stars representing ~58 and ~60 hours worth of data.

Description: O3 in the blue channel along with RGB stars.

Description: O3 best 40 hours in the blue channel along with RGB stars.

Description: Reprocessed with another ~6 hours of data for a total of 58 hours in O3 alone. 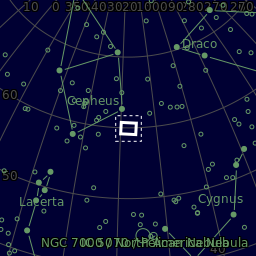