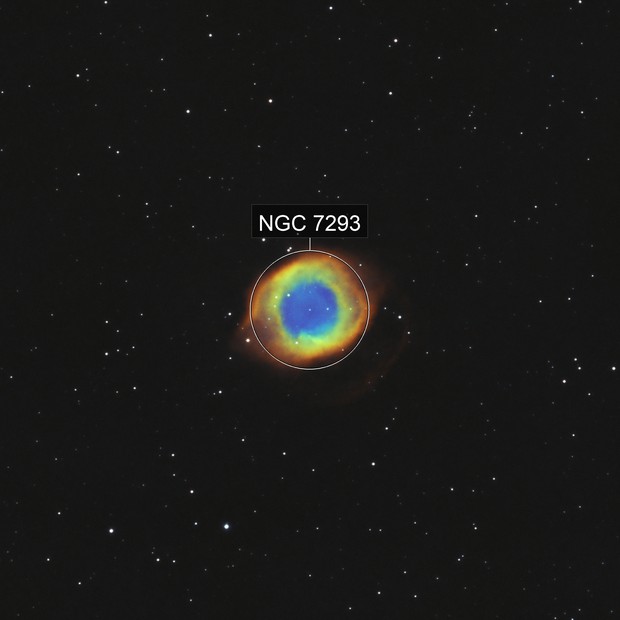 The Helix Nebula, also known as NGC 7293, is a planetary nebula located in the constellation Aquarius. This object is one of the closest to the Earth of all the bright planetary nebulae. The distance, measured by the Gaia mission, is 655±13 light-years. It is similar in appearance to the Cat's Eye Nebula and the Ring Nebula, whose size, age, and physical characteristics are similar to the Dumbbell Nebula, varying only in its relative proximity and the appearance from the equatorial viewing angle. The Helix Nebula has sometimes been referred to as the "Eye of God" in pop culture, as well as the "Eye of Sauron".

The Helix Nebula is an example of a planetary nebula, formed by an intermediate to low-mass star, which sheds its outer layers near the end of its evolution. Gases from the star in the surrounding space appear, from our vantage point, as if we are looking down a helix structure. The remnant central stellar core, known as the central star of the planetary nebula, is destined to become a white dwarf star. The observed glow of the central star is so energetic that it causes the previously expelled gases to brightly fluoresce.

A closer view of knots in the nebula
The Helix Nebula was the first planetary nebula discovered to contain cometary knots. Its main ring contains knots of nebulosity, which have now been detected in several nearby planetary nebulae, especially those with a molecular envelope like the Ring nebula and the Dumbbell Nebula. These knots are radially symmetric (from the CS) and are described as "cometary", each centered on a core of neutral molecular gas and containing bright local photoionization fronts or cusps towards the central star and tails away from it. All tails extend away from the PNN in a radial direction. Excluding the tails, each knot is approximately the size of the Solar system. There are about 40,000 cometary knots in the Helix Nebula.

The excitation temperature varies across the Helix nebula.[17] The rotational-vibrational temperature ranges from 1800 K in a cometary knot located in the inner region of the nebula are about 2.5'(arcmin) from the CS, and is calculated at about 900 K in the outer region at the distance of 5.6'.
(c) Wikipedia