NGC 7635, also known as the Bubble Nebula, Sharpless 162, or Caldwell 11, is an H II region emission nebula in the constellation Cassiopeia. It lies close to the direction of the open cluster Messier 52. The "bubble" is created by the stellar wind from a massive hot, 8.7 magnitude young central star, SAO 20575.

The nebula is near a giant molecular cloud which contains the expansion of the bubble nebula while itself being excited by the hot central star, causing it to glow. (Desc creditcs: Wikipedia) 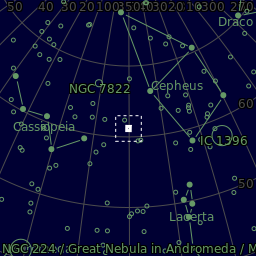