I thought I would try this curious patch of sky, wasn't sure what it was called until just now

Had terrible problems getting going ... for some reason NINA / ASTAP / stellarium were getting RA points that seemed to jump around all over the sky , Dec was rock solid . EQMOD however was rock solid. Plate solving wouldn't work cause of this ... took me a while to realise what was going on. Eventually had to restart computer ... once did that worked fine.

Meridian flip and focusing all worked with NINA , clouds stayed away ... took 72 subs 24 of each ... lost a few due to guiding problems, thin cloud

Processing was a major problem ... I am very new to doing hubble palette and this one was really hard ... the Oiii was particularly difficult ... have spent about eight hours on processing and still not happy ... but posting nay way

I will probably redo plus try another channel combo

Wiki tells us ....
Sh2-155 (also designated Caldwell 9, Sharpless 155 or S155) is a diffuse nebula in the constellation Cepheus, within a larger nebula complex containing emission, reflection, and dark nebulosity. It is widely known as the Cave Nebula, though that name was applied earlier to Ced 201, a different nebula in Cepheus. Sh2-155 is an ionized H II region with ongoing star formation activity,[1] at an estimated distance of 725 parsecs (2400 light-years) from Earth.[2][3]

Sh2-155[4] was first noted as a galactic emission nebula in 1959 in the extended second edition of the Sharpless catalogue,[5] being a part of the much larger Cep OB3 Association.[5] Although Sh2-155 is relatively faint for amateur observation, some of its structure may be seen visually through a moderately sized telescope under dark skies.[6][7]

Sh2-155 lies at the edge of the Cepheus B cloud (part of the Cepheus molecular cloud), and is ionized by young stars from the Cep OB3 association.[8] It has been suggested that radiation from the hot O-type star HD 217086 is compressing the region, triggering the formation of a new generation of stars.[9] A study of the region's young stellar objects by the Chandra X-ray Observatory and Spitzer Space Telescope shows a progression of stellar ages in front of the cloud, supporting the hypothesis of triggered star-formatio 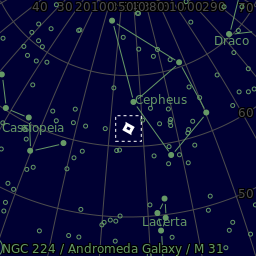