Description of the Fornax Galaxy by Wikipedia:

"The Fornax Dwarf Spheroidal is an elliptical dwarf galaxy in the constellation Fornax that was discovered in 1938 by Harlow Shapley. He discovered it while he was in South Africa on photographic plates taken by the 24 inch (61 cm) Bruce refractor at Boyden Observatory, shortly after he discovered the Sculptor Dwarf Galaxy.

Find my annotated image which shows the 6 Globular Cluster here

The yellow circles with For 1 to For 6 show Globular clusters. All bluegreen circles and markers show the 849 PGC galaxies in the image!

The interesting in this image layout are the Molecular Clouds.

there are Molecular Clouds visible south of the galaxy in this image!

More info on the exposures:

The image is a Cooperation between me: Gerald Wechselberger - and Dr. Franz Gruber. 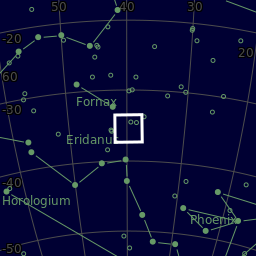