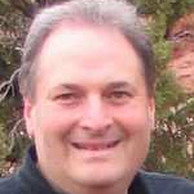 I've loved astronomy as long as I can remember, but could never see much with the low-end equipment available to me. Then a few years ago I discovered digital cameras, and the heavens opened ...

I've loved astronomy as long as I can remember, but could never see much with the low-end equipment available to me. Then a few years ago I discovered digital cameras, and the heavens opened ...

I've definitely taken the incremental, low-cost approach to this hobby. I began with a Canon PowerShot A560 point-and-shoot camera on a tripod, after discovering that someone had hacked the operating system (CHDK) so you could take exposures longer than 15 sec. The initial goal was to see more than my eyes could, and I reached that goal almost immediately!

Soon I was trying afocal (eyepiece projection) astrophotography through a Meade 4501 (4.5" f/8 Newtonian with an RA tracking motor) that is sort of at the high end of "toy" telescopes, using camera adapters made from PVC sprinkler pipe parts. I found you could get decent pictures of the Moon that way, but being too dumb to know otherwise, I wanted to do some deep sky imaging too. I got lousy pictures of the Andromeda Galaxy, but they were enough to get me excited because even as a beginner I was "seeing" a lot more with the camera than I could with my eyes. You can actually do OK on M42 afocally. About this time I discovered Telrad finders, a huge improvement on the plastic garbage finder I had before. I've gotten pretty good with a Telrad, and enjoy the hunt for new objects.

I got an old Meade DS-60 scope on e-Bay (this one is sort of the low end of "toy" scopes) and tried to use its motors to "roboscope" my Meade 4501 mount. That never worked well, but in the mean time I picked up an old, used CG-5 mount (the old one with no ball bearings and no GoTo), put the 4501 on that, and built a home-made piggyback set of rings (from ABS pipe and nylon screws, with some aluminum track) to mount the DS-60 as a guide scope using a Meade LPI as the guide camera. This resulted in pictures of things like the Lagoon and Trifid nebulae and the Sombrero Galaxy with up to about 3 minute subframes using the Canon PowerShot afocally. At this point I was reaching the limits of exposure with this camera; amp glow starts to overwhelm at longer exposures, even though the software would allow you to go longer.

So I needed a better camera. I got on e-Bay again and found a Meade DSI IIc, convincing my wife after the fact that I really did "need" this purchase. This was a big step up and was my most expensive acquisition to that point. So I had fun in the summer of 2011 using the DSI IIc with a focal reducer on the 4501, guided by the LPI on the DS-60, with a GPUSB providing a guide port for my CG-5. I finally started getting images that looked a little bit like the things of beauty I found online.

From there I've added gear incrementally: I found a DSI Ic online to replace the LPI as a guide camera, and was thrilled to find I no longer had to hunt all over for suitable guide stars; something bright enough was always in the field of view. I replaced the DS-60 with a used Orion Short Tube 80 mm refractor that came with a set of rings, and locked it down hard on the top of the 4501's rings, decreasing flexure significantly. By this time it was winter and I was concerned about leaving my (actually, my university's) trusty MacBook outside while imaging, so I invested in some USB repeater cables (30 m worth!) so I could bring the laptop into my warm living room and control things from there rather than freezing in the dark. I also discovered I could do wider-field imaging at faster speeds with the ST80 scope, and a minus violet filter helped a lot to get rid of the purple rings around the stars. This got me through the spring of 2012.

For over a year I'd had my eye on the f/4 imaging Newtonians, as it looked like they would give me the most bang for the buck and would finally allow me to move beyond the realm of "toy" telescopes (I guess the ST80 isn't exactly a toy, but it's sure no apo!). We took an impromptu vacation to visit family in Southern California, and I made pilgrimages to a couple of telescope stores I knew about. At the second, I struck gold: a deal on a slightly used Astrotech AT8IN, one of my "dream" telescopes, and miraculously my wife went along (maybe because I told her I was going to buy an "optical tube," and she thought that would be another relatively inexpensive telescope part, not the behemoth she later found it to be). I brought it home and mounted it. I knew this would be heavy for my CG-5, but figured I had enough experience with that mount and with doing things on the cheap that I could make it work, and I did it. It guided about as well as the 4501 did, and probably better (experience really does make a difference).

None of the upgrades I contemplated next were cheap (at least by my standards; apologies to those of you who have the bar set higher). I wanted to get a larger format camera, and logically (but perhaps not financially) it made sense to go monochrome with filters (it would let me go deeper, which is a long-term goal). I also wanted a more sturdy, GoTo capable mount, which would need to be at least $1500 or so, and unless I were to write a book on cheap astrophotography and make money by selling a lot of copies, I didn't anticipate ever convincing the boss on that one. However, in December 2015 Skywatcher had a good sale on EQ6 mounts and I obtained the needed permission to get one. Wow, what a nice improvement that has been!

Most recently I made another jump, to monochrome imaging with the ASI1600MM-Cool, LRGB and narrowband filters, and a filter wheel. As you can imagine, this took a lot of work to convince the boss, but I'm learning tons of new things.

In real life, I am a professor of chemistry at Brigham Young University, and do research on the application of Fourier transform mass spectrometry to the study of supramolecular complexes. Most recently, we have developed a new method for measuring molecular size to complement the very high performance mass measurements we can make with the Fourier transform mass spectrometer. As with astrophotography, I'm having fun with my job.