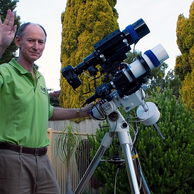 A country-born Western Australian who migrated to the city with family during late secondary schooling and has remained there ever since.

A country-born Western Australian who migrated to the city with family during late secondary schooling and has remained there ever since.

A life-long interest in Astronomy that initially peaked in the 6 or 7 years after moving to the city with Astronomical group membership, telescope acquisitions and attempts at 35mm film photography through and piggybacked on it.

A waning of involvement due to work and family commitments has been renewed in recent years with Perth Observatory volunteer work and the discovery of the photographic capabilities made possible by the march of computerisation.

SmugMug http://scottastrophe.smugmug.com/ contains a chronicle from 2010 of the progress of my renewal of interest in Astrophotography (AP), including the mistakes, as these have helped to seat home the recommendations found in countless books, web sites and forums on the AP topic.

In early November 2012 I established an AstroBin presence for my favourite shots at
www.astrobin.com/users/scottastrophe/ and was up to date with SmuMug from end of January 2013.