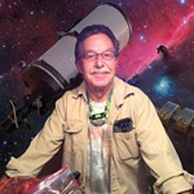 Terry was born in England and migrated with his parents as a child to Australia in 1967. His interest in astronomy began when he was thirteen and found himself inspired by the writings of astronomer Sir Patrick Moore, and under the dark skies of the…

Terry was born in England and migrated with his parents as a child to Australia in 1967. His interest in astronomy began when he was thirteen and found himself inspired by the writings of astronomer Sir Patrick Moore, and under the dark skies of the Australian outback he found what would ultimately be his life's calling. Terry worked as a photographer until 1979, and from 1980 until 2000 he worked in the commercial sign industry in sales, design, and project management in Australia.

In the mid 1980's Terry decided to combine his two loves - photography and astronomy into the hobby of astrophotography. His interest and skills continued to grow, spanning the transition from film to digital imaging. Terry's astrophotos have been published by NASA and featured in Astronomy, Sky at Night, Sky & Telescope, Astronomy Now, National Geographic, The Daily Mail, Yahoo, Space.com, and many other well-known online publications.

In 2000 Terry moved to Western Michigan in the United States where he lived for 17 years still working in the commercial sign industry and engaging in astrophotography from his private backyard observatory. In 2016, he retired from his career in the commercial sign business to move to Colorado where he supervised the construction of the Grand Mesa Observatory, brought it to operational status, and now runs the day-to-day operations as its Director.

Terry also is a major contributor to astronomy education on the Western Slope of Colorado, giving talks about astrophotography to schools, clubs, libraries, and other organizations as part of Grand Mesa Observatory's outreach program, and he operates downunderobservatory.com, an online astrophotography tutorial service, with instruction on equipment, and image acquisition and processing. This service reaches students all over the world. Several of Terry's students have themselves earned APODs.

The wonders of our universe are infinite and the idea of gazing up into the night sky and being able to observe clusters, nebulae and galaxies that existed way before mankind existed still fascinates me today.

Observatory Director and teacher of Astroimaging