In the upper left lies NGC 1365, the most prominent member of the Fornax galactic cluster (visible in the southern sky). It’s classification is “barred spiral galaxy” due to the straight structure traversing the galaxy’s center (nearly horizontally in this picture). One theory has it that the barred structure functions to feed gas and dust into the central region, promoting star formation and feeding the central black hole.

The Fornax Cluster lies at about 62 million light-years distance, and covers about 28 sq. degrees of the sky. This image covers more than 200 members of the cluster. We divide this galactic cluster into two groups, the main one is centered on NGC 1399 (lower right) and the other on NGC NGC 1316 (well out-of-frame toward the left). The latter is ‘falling’ toward the former, and in the far-distant future the two subclusters will merge.

Speaking of objects merging, NGC 1399, appears to be cannibalizing NGC 1387, as astronomers have detected a faint bridge of stars between the two, with the former massive galaxy gravitationally sucking stars from the much smaller NGC 1387. But beyond this interaction, the Fornax cluster is a rather quiet place, dominated by old, and relative quiescent elliptical galaxies.

A more fully annotated version of this image, showing many more galaxies, is here

. The annotated galaxies start with the letters ‘NGC’ or ‘PGC’. The former is a general catalog of deep-sky objects (on this image only galaxies appear), and the latter is a catalog of galaxies, exclusively. The ‘TYC’ designations indicate stars. Also, an enlarged view of NGC 1365 is here 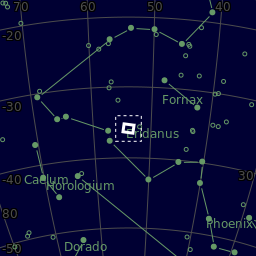