This is the result of a cooperation of six astrophotographers from different areas of Germany. I am very proud to have been part of this team! :-)

After many weeks of bad weather, a stable weather situation was announced shortly before new moon, which enabled us to take raw data for a few nights in a row. Enthusiastic about taking a deep and detailed picture of a not so often shown region in the constellation Canes Venatici, the group of photographers spontaneously got together.

In the technical card I could only store the information of the exposures I made. Here is the complete overview:

We would like to thank Frank Schmitz, Ronny May, Markus Wirth, and Sven Kreiensen for their advice, support and good mood! Maybe you will be part of the next joint project.

Here are some interesting informations about NGC 4151 (Wikipedia):

NGC 4151 is an intermediate spiral seyfert galaxy with weak inner ring structure located 19 megaparsecs (62 million light-years) from Earth in the constellation Canes Venatici. The galaxy was first mentioned by William Herschel on March 17, 1787; it was one of the two Seyfert galaxies described in the paper which defined the term. It is one of the nearest galaxies to Earth to contain an actively growing supermassive black hole; it was speculated that the nucleus may host a binary black hole, with about 40 million and about 10 million solar masses respectively, orbiting with a 15.8-year period. This is, however, still a matter of active debate. Some astronomers nickname it the "Eye of Sauron" from its appearance.

Interesting are the numerous (interacting) galaxies, tidal tails and also background galaxies. I think the cooperation was worth it and we will hopefully repeat it sometime. :-) 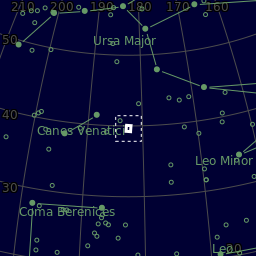