This image captures a pair of ring galaxies located in the constellation of Draco at a declination of +66 degrees. I don’t know of another place in the sky where two ring galaxies, similar to each other in actual size, are in such close proximity from our perspective. Ring galaxies are believed to be created when 2 galaxies have a close encounter and that is believed to be the case for each of these ring galaxies.

NGC 4513, at bottom, is a ring galaxy located 110 million light years away. This galaxy spans 3 arc-minutes in our apparent view, which corresponds to an actual diameter of 100,000 light years. The outer ring is very faint and is easier to see on the inverted Astrobin view. As described in the 2019 paper, “Star Formation in Outer Rings of S0 Galaxies – NGC 4513 – A Multi-spin Ringed S0 Galaxy” by Proshina, Sil’chenko and Moiseev, this outer ring rotates in an opposite direction of the inner ring. The outer ring is likely the result of tidal disruption by a massive gas-rich galaxy satellite.

VII Zw 466, at top, is a collisional ring galaxy located 700 million light years away. It is identified in the image mouseover as PGC 41524. Collisional ring galaxies are thought to occur when a larger galaxy collides head-on with a smaller galaxy down its polar axis, creating an expanding density wave of star formation. This wave results in the formation of a hole in the center of the larger galaxy and an expanding ring.

This collisional ring galaxy spans only 0.5 arc-minutes in our apparent view, similar to the planet Jupiter from our perspective. The galaxy has an actual diameter of about 100,000 light years. Three smaller galaxies lie just to the left.

The 1978 paper, “UBVR Photometry of the Ring Galaxy VII Zw 466”, by Thompson and Theys, does an excellent job of explaining the collision. Only 2 of the 4 galaxies were involved in the collision. The ring (PGC 41524) is the remnant of one galaxy, with its core visible as the small knot at 2 o’clock inside of the ring. Notice that the region immediately around and including that knot is slightly more yellowish in color than the blue ring itself. The other colliding galaxy is the small edge-on galaxy to the lower left (PGC 2686685). Its disk is slightly warped. More importantly, the color of this disk is bluer on the right side (closest to the blue ring) and more yellow on the left side. This color difference is hard to discern in my image but was studied extensively in the paper as evidence of the collision.

The elliptical at middle left (PGC 41549) is the same distance away as the two colliding galaxies, but there is no sign that this galaxy was involved in the collision. The small galaxy at upper left (not designated on the mouseover) is much further away and is not associated with the other 3 galaxies. 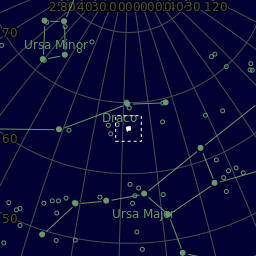