The largest globular cluster in the Milky Way.

Located in the southern constellation of the Centaur, NGC 5139 is 16,500 light-years away. Its name, Omega Centauri, is reminiscent of that of a star. This is indeed what believed E.Halley when he observed it in 1677.

It is actually a globular cluster of more than 10 million stars that are billions of years old. They fit in an apparent volume equivalent to that of the full moon. (36,3')

In recent years this status of globular clusters has been called into question. Several indications suggest that Omega Centaur is actually the nucleus of an ancient galaxy.

If its visual appearance resembles that of globular clusters, Omega Centaur has some singularities:

• On the one hand it contains several populations of stars. Their time-extended formation and diversity contradicts the scenario that stars in a globular cluster are the same age and composition

• On the other hand, a stream of stars originating from the cluster has been identified, a current that is attracted to our Milky Way. These could be the remains of a nearby dwarf galaxy whose heart remains, Omega Centauri

• There is a final clue in favour of the hypothesis of a dwarf galaxy, A small galaxy that fell into the trap that the Milky Way set for it by its gravitational force,billions of years ago, and which is devoured its stars by the thousands..., little by little, piece by piece, like two other famous neighbors familiar to the inhabitants ofthe southernhemisphere: the Little and the Great Cloud.. .

Astronomers have measured the movements of 100,000 stars in the cluster. Their movements too fast can only be explained by the presence of a black hole. An exotic celestial object as found in the heart of galaxies, not globular clusters... 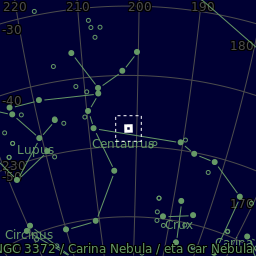