I started this project back in February, and it seemed to be a real magnet for high cirrus. So it’s taken a while, with a lot of subs thrown out, but it is nice to put it all together.

Revision B https://astrob.in/zjlatd/B/ is a starless version

BBW56 and Cometary Globules
Cometary globules are a special type of molecular cloud, which were first observed in 1976. They have a comet-like morphology, consisting of compact, dusty, opaque head, and a long, faintly luminous tail. It is thought that CG’s are caused when nearly spherical gas clouds are blasted and collapsed by a SN shockwave. The shock compresses the cloud to form the head, and the blast wave drives the material away from the SN to form the tail. An alternative mechanism is that CGs are formed when the UV radiation from massive O stars photoionizes the gas cloud and shock fronts compress the head of the cloud. The less dense parts of the cloud are separated from the head of the cloud by the radiation and ionization shocks, and the tail is formed out of this eroded cloud medium.

Interestingly, most CG's are located in the Gum nebula. These Gum nebula CG’s are all located within a radius of 6 to 11 degrees from a central point, and have their tails pointing away from this central region. This suggests that they are all located at the edge of a large ionised bubble. The central sources of this ionisation are thought to be the supergiant O-type stars Gamma 2 Velorum and Zeta Pup, and the Vela SNR. The ionisation created by these three sources is incredibly intense, with Zeta Pup alone producing a fierce stellar wind blasting out at 2300 km/sec causing it to lose mass at 10 million times the rate of the Sun's solar wind. It is these winds that are blasting and shaping BBW56.

Description: Illustration of location of the cometary globules in the Gum nebula 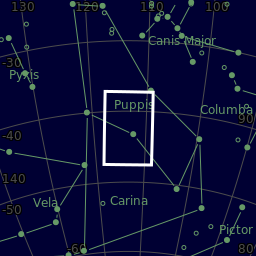