This has been a very difficult object for me. Probably I need darker skies than I have here in Mapleton (I tried 300 s luminance subs, had way too much sky glow, cut it back to 180 s, and still had quite a bit), and I just seem to have a more difficult time with LRGB these days than with narrowband (Narrowband is truly magic!). This kind of faint reflection nebula also seems to be the most difficult type of target for me. Then to make this even more difficult, leaving a star as bright as Rigel in the field of view presented all kinds of challenges, but I wanted it there because I understand Rigel is thought to light up the nebula. Finally, the Tamron lens does seem to perform less well with the blue filter for some reason, requiring a lot of star shrinking in the blue channel to avoid nasty rings around the stars. I’m still struggling a little to get good flats, though my L and R flats weren’t too bad this time (I think I’m probably exposing them too much so they overcorrect). Gradient Xterminator was a huge help, along with Carboni’s Soft Color Gradient Removal action. Of interest to me were the satellite trails that appeared in nearly every subframe; two parallel trails that appear and disappear as if the satellite is slowly tumbling. I’m guessing these must be geosynchronous or at very least in high, nearly equatorial orbits. They appeared frequently enough in the same places that sigma-clip stacking did not eliminate them, and I left them in (running vertically through the Witch’s chin) because they really were in that part of the sky.

Description: Boosted the saturation a little. 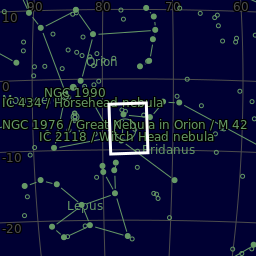