Finally a really first light of this new Takahashi Epsilon-160ED

Usually I take bigger integration time (around 70 hours), at this speed I spend 'only' 28hours, half of the regular time to obtain these nice results.
Also, this scope fits really well with the modern CMOS camera with such small pixels.

Description from waid-observatory.com :
Sh2-224 is a very faint supernova remnant located approximately 14,700 lightyears distant in the constellation Auriga.  This unusual celestial object is also designated VRO 42.05.01 and has been the object of considerable research using both ground based and space based telescopes including the ROSAT and the Dominion Radio Astronomy Observatory.  The nebula created by the supernova explosion is composed of two visual parts.  It is postulated the supernova explosion created a bubble like structure.  (Visible in the 'lower right' of the image.)  As the shockwave from the explosion progressed into a very low density region of the interstellar medium, a "wing" component was expelled.  (Visible in the 'upper left' of the image.)

Supernova explosions are the end stage of the natural life cycle of very large stars.  Such events are responsible for the distribution of heavy elements into the interstellar medium where they are incorporated in the birth of new star systems.  Without this phenomenon, planets, such as the Earth along with life as we know it, would not be possible. 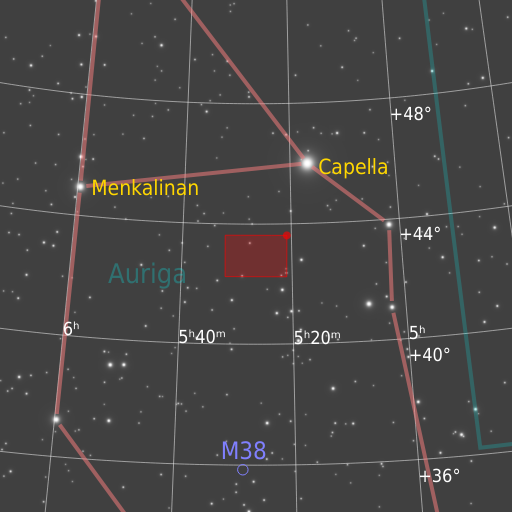